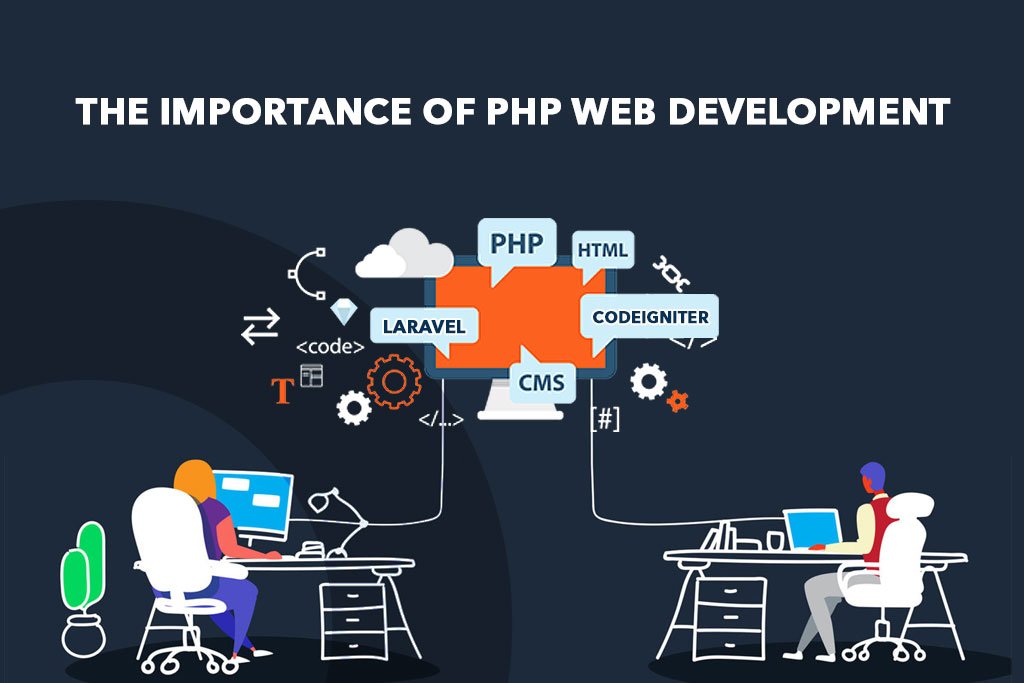 Grace Hopper was a phenomenal woman, although her name isn’t as well known as it should be. Besides being a United States Navy Rear Admiral, she was the brains behind the world’s first compiler. She also believed that coding should be done in high-level languages, as near to English as possible.

Today, she would be proud of PHP. It is one of the simplest and most extensively used web development tools. The name PHP is a recursive acronym for Hypertext Preprocessor. PHP as a language was invented quite accidentally by a computer scientist known as Rasmus Lerdorf in 1995.

According to a recent web survey, over 78% of the world’s websites are powered by PHP in one way or another. Thus, its importance can hardly be overstated when it comes to building and maintaining websites.

PHP at a Glance

To understand why PHP is so important, we first need to take a brief look at how it works and its properties.

PHP is a server-side language that receives client requests, processes them, and outputs the results. Thus, the client never interacts directly with it; it runs sorely on server resources.

A typical request from a client for a web page would be relayed from their browser through a web server software like Apache, to the target server. PHP picks up that request, retrieves the required web page, and gives the response as an HTML file output or similar.

There are numerous web server platforms and languages which interact all over the internet, and PHP has to deal with all of them effectively. It has to be very dynamic and adaptive to do that. As we shall see, PHP is all that, and more.

Importance of PHP for Web Development

Despite going through a lot of tough phases and facing competition from the likes of Java Stack and Ruby on Rails, PHP is still going strong 24 years later. This is an amazing feat in an environment where obsolescence is the order of the day.

So why is PHP such a force to be reckoned with? Here, we will explore the main reasons for this, and also attempt a prediction regarding its future. Incidentally, the PHP mascot is an elePHPant.

The first and most obvious reason is that in its almost 25 years of existence, PHP has seeped into virtually every system and framework. As the statistics above show, it is used by almost 80% of all the world’s websites.

This is partly thanks to giants like WordPress, CodeIgniter, Symfony, and Joomla which run on it. These are the movers and shakers of the Internet, with WordPress alone powering 35% of all websites. So long as these continue to use PHP, it remains a powerhouse.

For such companies, it is not an easy feat to make the jump from PHP either. Such a move would affect hundreds of millions of people and would take up huge resources.

2. PHP is Very Easy to Learn

PHP is the ultimate beginner’s language. Experts may call it inelegant or crude, but it is the first programming language many web developers learn and the one they use most.

Using PHP is also incredibly easy. Once you have a basic understanding of how it works, you can start creating and customizing websites almost immediately. It is like building with Legos once you know how to use each piece.

This feature makes it very appealing to the majority of website administrators who want to have an easy time running their sites. A lot of programming veterans started their careers with PHP due to this same feature.

It also takes less time to carry out a project using PHP, than it would take with other languages. This is important when such a project needs to be implemented fast.

This goes hand-in-hand with its ease of use, and the sheer number of people who know how to use it. The talent pool of PHP experts is large and saturated, which means that they can be hired for minimal rates. Most site administrators will automatically turn towards this option.

Besides that, hosting a web site with PHP is the cheapest all-around. For about $3 a month, you can host your website with any number of reputable companies. Compare that to Ruby on Rails, and you will have a lot of searching to do.

PHP is excellent at managing databases using various Database Management Softwares. It runs seamlessly with MySQL and other common languages. PHP is also good with web forms and implementing security features such as user data verification.

Open-source software designed for other functions can be integrated freely with PHP at the source code level. This has been the case with Joomla, Oracle, Sybase, and other major software projects.

6.  It is Compatible Across Major Platforms

PHP runs on all major platforms and operating systems. This includes Apple’s macOS, Windows, and Linus. This makes it very attractive to designers because they won’t have to spend extra time and resources customizing projects for different platforms.

PHP has evolved to have inbuilt functionality for tasks such as sending an email, generating GIFs, communicating with other servers, and more. This is because it has its own libraries and can also be embedded within other languages like HTML using PHP tags.

Because PHP is open-source, developers all over the world are always contributing to its growth and security. As a result, it is one of the most secure server software. That is also why it is the language of choice for implementing security protocols for websites, as well as collecting and storing client data.

A support community is all-important to any programming language. PHP has the largest community support from veterans and students alike, who are always working on developing new ways and procedures. This helps encourage greener programmers and also helps to have the language stay on top of new trends.

This loyal community was instrumental in keeping PHP alive some years ago when it was on its deathbed. At that time, there was a lot of concern with scalability, but the community came together and helped launch a better, faster, and more scalable version.

Unlike HTML which is a static language, PHP is dynamic which means that it can make changes at runtime to reflect a different state. This is best illustrated with an example.

If a client puts through a ‘Welcome’ request, HTML simply displays ‘Welcome’. However, PHP will instead run a check on the current time and then respond appropriately. For instance, it could return ‘Good morning’ if that were the case. This makes it powerful for customizing content to the user’s taste.

As a language, PHP uses very little server resources thanks to its syntax. This helps to reduce latency and lagging, making for an overall fast processing and response time.

Other languages are more time consuming depending on how well they were optimized. Thus, PHP outperforms competitors out of the box.

While it was a late come to the Object-Oriented Programming table, PHP now implements it at a scale that is only rivaled by Java. It also has a single well-developed library that is miles ahead of the rest of the pack.

13. It is Reliable, Tried and Tested

PHP has been on the mainstream internet for over two decades, since 1997 when v5 was released. It has gone through every phase and survived. Developers have used it in all possible ways, testing its strengths and weaknesses.

It has proven to be reliable over and over again, resting on its powerful framework and evolving capabilities.

Read Also, Choosing the Best Code for Your Website: PHP vs. HTML

Why Choose PHP Over Other Languages

Apart from the many reasons already listed, there are many practical reasons why you might want to consider using PHP over other major scripting languages. At the end of the day, you need your website to deliver well beyond yours and the client’s expectations.

First, PHP is straightforward and involves the least hassle. Whether you’re developing a website yourself or having someone do it for you, it is the safest way to go. All possible challenges you’re likely to encounter have already been solved, and you will have the support of a massive community for assistance if need be.

Secondly, it is the most budget-friendly option for you. Websites can get expensive real fast, especially when you have to hire a lot of talent for different tasks. With the PHP platform, you will find a lot of eager experts who will be willing to charge much less to develop and maintain your website.

Talking of maintenance, PHP requires the least maintenance of all. Apart from updates and occasional debugging, it pretty much runs on rails. Your site will be that much more stable and reliable thanks to PHP.

Additionally, it will give your website an inherent layer of security. Whether it’s a simple blog or a sophisticated website handling payment data, PHP does it all. You will find it in use by most financial software because of this, and also because it integrates at the source code level.

Another major advantage that PHP lends to your site is its dynamic nature. It allows you to run content management systems so that you can personalize your content to your client’s satisfaction. This is a powerful feature that plays a big part in increasing traffic and conversion rates.

PHP vs Other Languages

Having looked at PHP so far, the final task lies in comparing it with the other major players in the field. A wise person always considers all options available,  no matter how inferior. While there is a lot that can be said about the other server-side languages, these general comparisons will help you to form an accurate idea.

JavaScript was previously only known to run the client’s side and browser until Node.js was introduced. Like PHP, it is also a cross-platform language running on Windows, Mac-OS, and Linux. However, there are many major differences between them.

For practicality purposes, suffice to say that while Java would be preferable because it is isomorphous, PHP is still the best option to build fully-fledged websites. Java has inherent security flaws in its code, while PHP is secure. It also has more developed libraries.

Ruby on Rails was very hot and trendy sometime in the past, but it is being taken over by JavaScript. While it is loved for its ‘elegance’ and works great for most websites, you will find it hard to find the talent to do it for you. Even when you do, it will not be cheap. Plus, it could even become obsolete in the near future.

Python is a very versatile language that is being implemented in numerous ways, including statistics and big data analytics. While it can be considered to have matured and could be used in place of PHP, it is much harder to implement theoretically.

However, it is also a very easy language to learn and use, and more people are getting proficient in it which makes it easier to find talent on Python than, say, Ruby.

(.Net)Core is a closed-source web programming language for and from Microsoft. It recently became open source and changed to asp.net or Active Server Pages. It bears the closest resemblance to PHP, but it is new and meant for Microsoft servers.

Like its mascot the elePHPant, PHP server scripting language is here to stay. At least that will be the case for the several foreseeable years ahead. It has adapted too well to lose significant ground to juvenile languages like JavaScript.

If you’re looking to build and host your website using PHP, do not worry. It is far too important to die any time soon, and is the most suitable and well adapted server-side language of all.